Rotary Students of the Month For March 2022 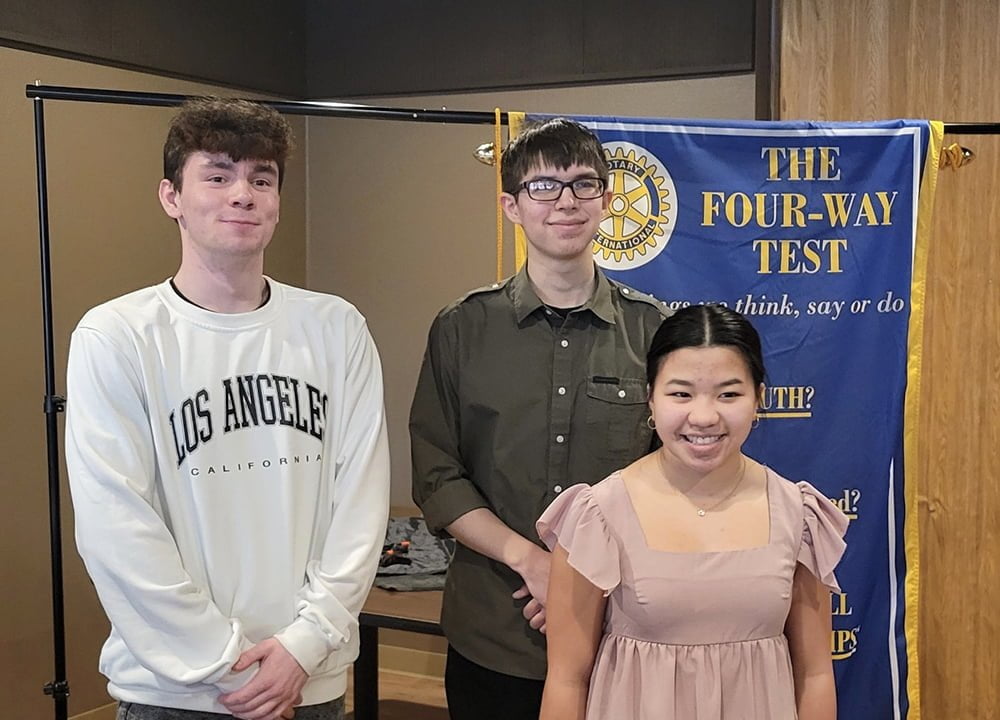 Ryder Thin Elk, a senior from Mary Walker High School, was introduced by Superintendent Todd Spear. Ryder began by thanking the group for inviting him to the lunch meeting. Ryder’s favorite subjects are art and writing. He said they keep his mind free from stress and his imagination going. Ryder has played on the soccer team for two years and has done a year of baseball. He is involved with Reserve Officers’ Training Corps (ROTC) and helps honor those Veterans who serve and have served. He hopes everyone shares that mission. Ryder appears to have a heart for service. He takes care of chickens, ducks, and hens and has delivered eggs to those in need during COVID. He also takes care of graveyards and cleans the yards of older people. A member of the Colville tribe, Ryder works for Spoko Fuel through Spokane Tribal Enterprises. He loves to read in his spare time, especially comic books and plays video games. After high school, he would like to take a year off, then go to a 2-year college and onto a 4-year university.

Principal Joe Feist introduced Katey Arleth, a senior at Deer Park High School, by telling us she is by far one of their top students. Since the First Grade, she has been in the Deer Park School District and likes “College in the Classroom.” Her favorite subjects are English and Pre-Calculus, and she loves the resources she gets out of those classes. Katey is part of Washington Extreme Sports, a combination of acrobatics, gymnastics, and dance, and has been involved in many competitions. She has been involved in DECA and was able to go to Nashville, Tennessee, through that program. Katey loves pottery and says she makes many “cool” projects like pots for plants. She wants to go into business at either the University of Louisville or Montana State. Principal Feist ended by saying, “she flies around a lot.” She literally flies during her Extreme Sports competitions.

Student of the Month, Kameron Toner, was introduced by Riverside High School Principal Clint Hull. Principal Hull said Kameron literally checks all of the boxes in activities and comes with a solid head on his shoulders. Kameron thanked everyone for his presence there and especially his parents for their support. His classes include Calculus, Literature, and Political Science. As a Senior, he spends time with the incoming freshmen, taking them under his wing. Soccer is his number one sport, and he has played with the same group of kids since he was five years old. He loves the school community and the staff and is close with them and his Cross Country and Soccer Coaches. Kameron would like to pursue Sports Medicine and try out for the Eastern Washington University Soccer Team. He reiterated; how thankful he is for his parents. “I am what I am today because of them,” he said. He concluded with gratitude for being there at the Rotary meeting.

What is the Deer Park Rotary Club?

The Rotary Club of Deer Park is about serving others, building relationships, and developing the next generation of leaders. Its annual fundraising events provide scholarships and educational activities for local students. Every month they select and honor outstanding high school students within our community. Their programs are not just for club members! For more information or to learn how you can make a difference in your community through Rotary, visit: DeerParkRotary.com