Rotary Student of the Month March 2021 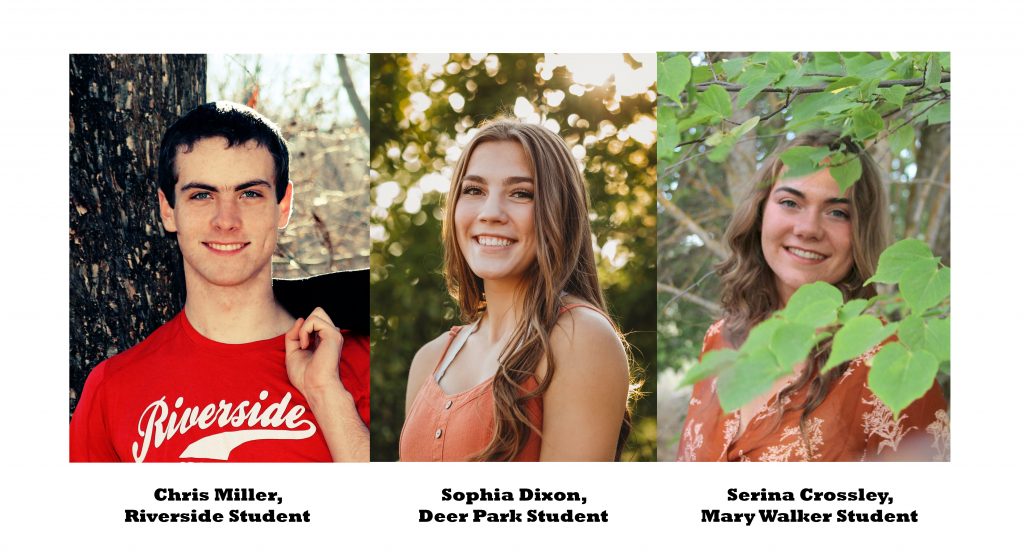 Here are the three “Students of the Month” chosen for March 2021.

Serina Crossley, Mary Walker High School – Rotarian Marty Hilton introduced Serina as a native of Springdale who believes she is the only senior this year who attended all twelve years in the Mary Walker School District.  In addition to high school, Serina is pursuing her AA degree in the Running Start program. Serina is a member of the girls basketball and softball teams at Mary Walker High School.  Both of their seasons were cut short due to Covid-19, and she’s happy soccer will soon begin. Outside of school, she serves as president of a girl’s group at her church, planning fun events and service projects for the group.  She also helps her mother in her business of raising and selling Labrador retriever puppies. Serina was a member of the Middle School Interact Club sponsored by our club.  When asked if she could change anything at the school, she said she would like to see it start up again, because she believes it made students feel more connected.  After receiving her AA, she will be assisting an orthodontist, and hopes to pursue a future as a dental assistant or orthodontist.

Sophia Dixon, Deer Park High School – Sophia and her mother, Kimberly Jacka, were introduced by Principal Joe Feist.  Mr. Feist described Sophia as a go-getter who also attends Running Start classes. He had not talked with Sophia until today, as she and her mother just returned from a trip to the University of Hawaii, which Sophia plans to attend.  Sophia’s sport has been wrestling, and she is looking forward  to it starting up again in May.  She recently joined a Yakima wrestling team, and will be competing in Virginia Beach, Virginia and Tulsa, Oklahoma.  She was excited about picking up her cap and gown and is looking forward to senior night.  Sophia will pursue a degree in Kinesiology and Rehabilitation Science at the University of Hawaii, with a future in Sports and Physical Therapy.  She has also been a member of the Middle School Interact Club when she attended Mary Walker Middle School, and her brother, Jake Osborn, was the President of the Springdale Interact Club when he was a senior at Mary Walker High School.  She thanked Deer Park Rotary Club for selecting her as a student of the month.

Chris Miller, Riverside High School – In introducing Chris, Principal Clint Hall said he believes Chris took every math class the school offers.  Chris said it is true that he did take a lot of classes and sometimes regrets he did, but he absolutely loves Riverside High School for its feeling of family.  He has five siblings and is the second oldest.  As a Running Start student at Spokane Community College,he chose to do that based on the experience his older brother had in Running Start.  His school activities include being the ASB senior class treasurer, and a member of Riverside’s cross-country team.  In addition to school, Chris is planning his Eagle Scout Court of Honor.  Chris’ Eagle Scout project was to clean up the Riverside School District’s trail system and replace signs.  Due to the weather, he wasn’t able to bark all of the trails, but did get a lot of bark placed.  He also serves as the President of the Boy’s group at his church.  After high school he will go on a two-year mission, and then pursue mechanical and electrical engineering at either BYU Idaho or BYU Provo. Chris thanked Deer Park Rotary Club for the honor of selecting him as the March Student of the Month.

What is the Deer Park Rotary Club?

The Rotary Club of Deer Park is about serving others, building relationships, and developing the next generation of leaders. Its annual fundraising events provide scholarships and educational activities for local students. Every month they select and honor outstanding high school students within our community. Their programs are not just for club members! For more information or to learn how you can make a difference in your community through Rotary, visit: DeerParkRotary.com