Local Talent: A Wheel With Many Spokes 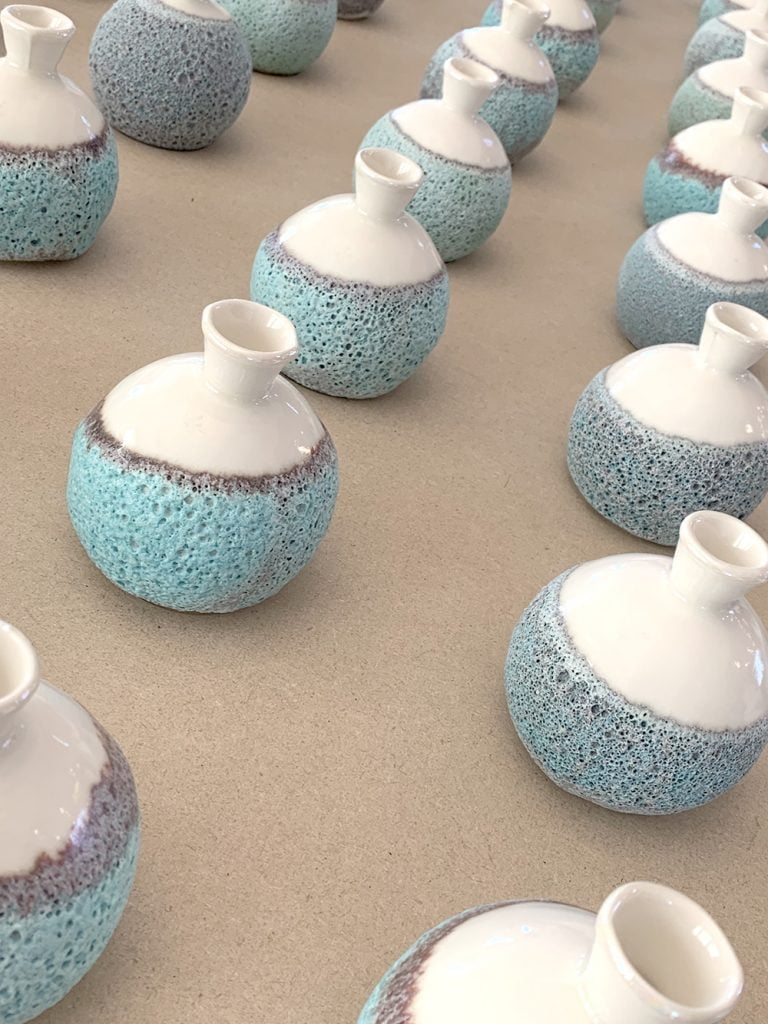 A successful art practice is akin to a wheel with many spokes, according to Harry Mestyanek. Mestyanek, a retired landscape architect, is now a full time ceramicist and potter. “You must be knowledgeable [and] proficient at many things,” he adds. “In the practice of ceramics and pottery you wear many hats.”

Mestyanek’s interest in ceramics was piqued when he took a few classes as art electives when pursuing his degree in Landscape Architecture at California State Polytechnic University, Pomona. He continued with this passion as a hobby as he worked in landscape architecture for 40 years, and now has retired and opened a community art studio space with his wife, Colette.

“[I’m] currently making both functional pottery and abstract sculptural pieces,” Mestyanek says. “I like keeping a foot in both of those areas.” Most of his pieces are hand-built from a slab of clay on a wheel. While he pursued his Master of Fine Arts degree at Washington State University, he says he was provided access to “state-of-the-art digital machines and technologies” that allowed him to explore the connections between the time-honored practice of ceramics and contemporary technologies and tools.

Something often said among artists is that they don’t have a true favorite piece; their “next piece” is their favorite. Mestyanek upholds this statement, saying he doesn’t have a true favorite yet, but notes his most interesting piece as an assignment while attending WSU. “I wanted to reference an ancient, popular-at-the-time, ceramic vessel,” he says. “I settled on … an Aryballos.” An Aryballos is an oil jar used by male Greek citizens & athletes back in the 6th & 7th centuries BCE. Mestyanek completed 500 of these Aryballos, using a specific technique called slip-casting, which allows for mass-production of pottery.

Aside from pottery and ceramics, Mestyanek has always loved to draw since his days as a child. As an architect, he often made conceptual and technical sketches, and now applies that same idea to his pottery. He still works in a sketchbook first, where he transforms his vision into something tangible.

Harry Mestyanek encourages people of all ages to try their hand in ceramics. “I have always found [ceramics] to be fun and rewarding,” Mestyanek says. “Like other avocations, it can be frustrating at times, but overall, I find it to be a great creative adventure.”

Harry and Colette Mesyanek have recently opened a community art studio near Whitworth University in North Spokane, where their work will be completed and displayed, and where they will conduct ceramic classes and workshops. The couple is currently scheduling studio tours, personalized lessons, and open studio memberships. For more information, contact the Mestyaneks at:

Artisans and creators have exceptional talents and abilities that often get overlooked or underpraised. If you or someone you know has an ability that you think should be highlighted, write the editor at [email protected] or Editor Deer Park Gazette, PO Box 1581, Deer Park, WA 99006.