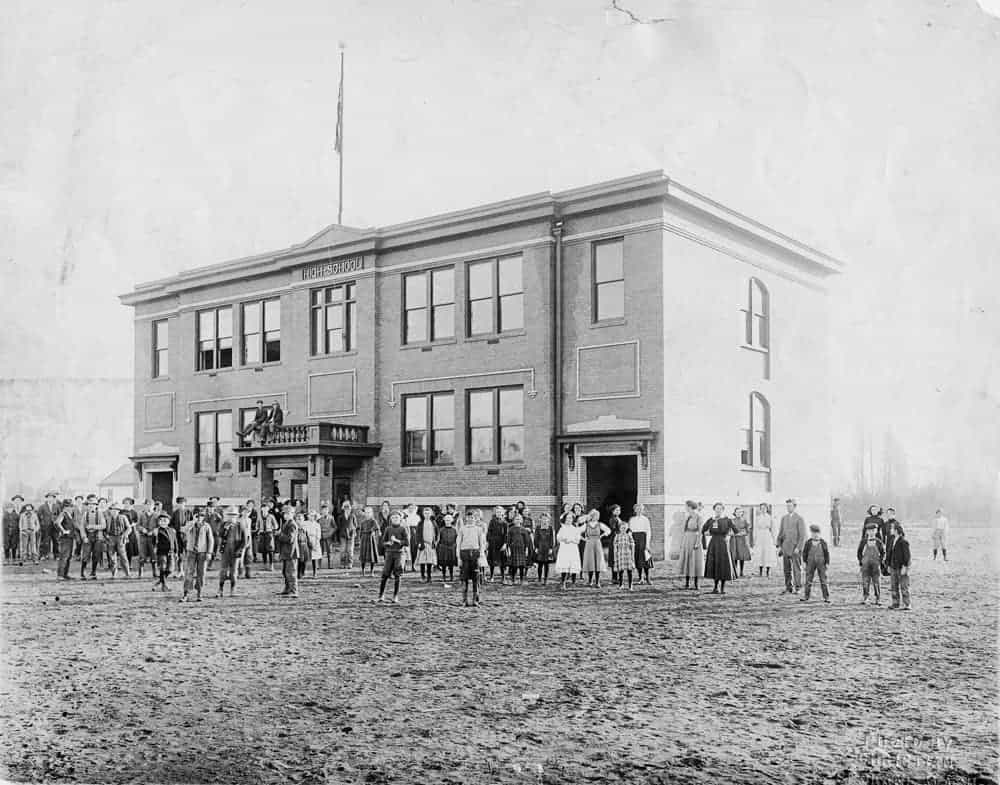 The Deer Park City Hall stands proud in the center of town, the brick building a staple in our community. From the outside, the building’s history is subdued, but the inside—especially the closed off third floor—tells a different story.

The building is situated on a plot of land that was transferred from Frank A. and Emma A. Reed to the Deer Park School District in 1911 for a trifling $1.00—roughly $28.00 today—and was intended for Deer Park’s very first high school. At the time, students in the Deer Park area who wished to continue their education past the eighth grade were forced to travel—and often relocate—to Spokane or Cheney.

The school cost $20,000 to build and was open to its first wave of students in the fall of 1911 as a two-year high school. By 1920, it had become a fully operational four-year high school that provided a multitude of classes and extracurricular activities, including baseball, football, and basketball. In 1932, the Deer Park Stags had their first trip to state with coach Sam Perrins, to whom Perrins Field was dedicated in 1990.

Following the closure of Arcadia Orchards in 1924, local land values declined rapidly, forcing a special election to be called in 1930 for a tax levy intended to cover the $40,000 shortfall in the school’s budget. Then, in 1935, a $10,000 bond was approved for an addition to the high school to make room for rising enrollment. A four-room addition was added to the east side of the high school, which included an auditorium.

In 1958, a new high school was built on Colville Road, and the old building was renamed Crawford School, housing seventh and eighth graders from the overcrowded grade school. However, it wasn’t long before the building started to deteriorate. In the 1960s, rumors of the building being condemned were rampant, and the school ended up having several areas closed off by the Fire Marshal, causing classes to be held solely on the main floor. Following the creation of the new middle school in 1973 (which was situated where Arcadia Elementary is now), all of the students were moved.

Upon discussion of what to do with the now-empty building, portions of the basement walls were partially sandblasted to reveal the original brick construction. Multiple shops opened up in the space, including a television dealer, a quilt shop, and Deer Park’s first food bank.

Soon, having outgrown their former building, Deer Park’s City Hall bought the Crawford School and renovated the main floor to create 6,000 square feet of office space, where it still resides today. Prior to the dedication of their new building in 1998, the Deer Park Library was housed in the basement of the building. Now, the lower level is home to Deer Park S.C.O.P.E., the Spokane County Sheriff’s desk, and a Senior Center providing Meals on Wheels.

Now, the building’s safety and future are again being discussed. The City of Deer Park is having work done to seal air leaks from the building, as well as upgrading the heating and cooling. The roof and many other portions of the building are still of concern. The question right now is whether the City should continue to invest in this historical building, or whether to go a different direction with a new building.