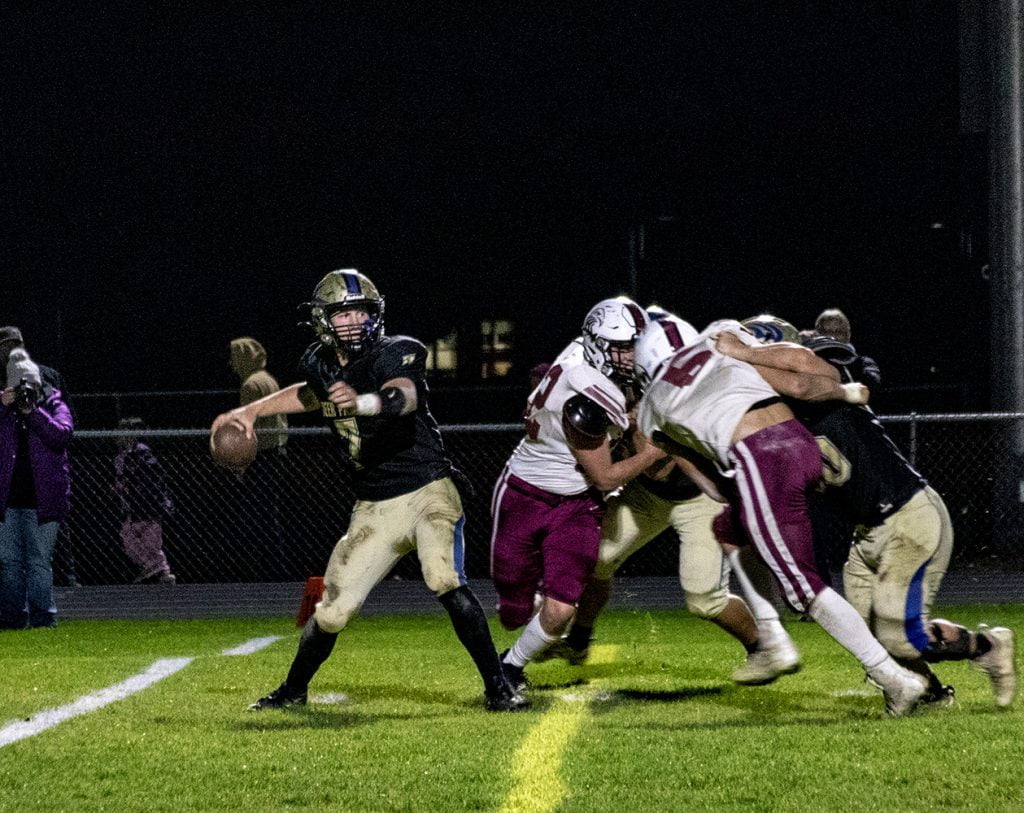 The Colville Crimson Hawks outlasted the Deer Park Stags 28-21 on Friday in a hard-fought meeting between Northeast A League high school football foes.

In front of the home crowd, Deer Park went ahead 14-13 late in the third quarter, however Colville scored touchdowns on their next two drives to open the fourth quarter. The Stags’ offense answered, but was ultimately unable to complete the frantic comeback.

This article has been been made possible by support from __________ 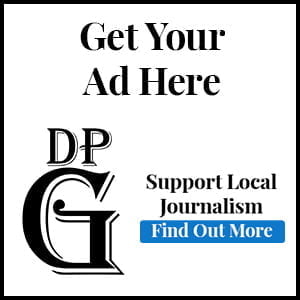 Following Deer Park’s punt on the opening possession, the next seven drives of the game were quite eventful. The Crimson Hawks fumbled on their first offensive play from scrimmage, giving the Stags terrific field position. However they couldn’t capitalize, turning it over on downs within the red zone.

Colville struck first late in the opening quarter — senior wide receiver Allan McKeraghan found the end zone on a fourth-and-goal from the 2-yard line to take a 7-0 lead. Earlier in the drive, a 35-yard connection from senior quarterback Cale Roy to senior wide receiver Colbie McEvoy set up the Crimson Hawks in scoring territory.

The Stags again threatened to find the end zone but failed to convert on a fourth-and-goal from the 20-yard line. On third down, the snap sailed over senior quarterback Remi Scott, who was able to dive on the ball to save the possession. Sophomore wide receiver Gavin Carnahan nearly caught a pass in the end zone on fourth down, but wasn’t able to corral it in.

Deer Park junior defensive back and wide receiver Decader Bird made back-to-back impactful plays to help the Stags tie the game. When Roy launched a pass deep to a Colville receiver, Bird intercepted the ball and returned it into Crimson Hawks territory.

On the next play, Scott hit his receiver in stride for a 32-yard completion. Junior running back Liam Bogle punched in the 5-yard score to knot the game at 7.

Colville regained the lead after converting a pair of fourth downs — the first by a Stags’ offside penalty.

“The truth’s always in the [game] tape,” Deer Park head coach Levi Hogan said. “Just those little things that all of a sudden change a defensive stop into a touchdown for them. Those are the things that I think will stick out again on film.”

On fourth-and-one, Roy connected with McKeraghan, who tiptoed the left sideline, broke a couple tackles and was off the races for the 45-yard score. After the extra point was blocked by Bogle, that score — 13-7 — remained until halftime.

Colville opened the second half with a quick three-and-out, then Deer Park answered with a drive that took nearly the rest of the third quarter. The exclamation point on the 16-play possession was a looping touchdown pass from Scott to Carnahan in the left corner of the end zone.

Trailing 14-13, the Crimson Hawks completed a 35-yard pass to end the third quarter. Junior linebacker Zaine Stoddard sacked Roy on second-and-goal, then Roy found McEvoy for a 13-yard touchdown as well as the two-point conversion.

Scott connected with Bird for their own 37-yard touchdown on the following drive, and the defense forced the Crimson Hawks to punt, however the Stags were unable to muster any more late-game heroics on offense.

Hogan said he liked the resilience of his team, who continued battling until the final buzzer.

“Colville’s got some weapons — their quarterback and receivers are pretty good,” said Hogan. “In the position they’re in, a lot of teams would just kind of roll over and tuck tail and these guys didn’t want to do that.”

The third straight loss concludes the regular season for the Stags, who will host Cascade High School on Friday in a crossover matchup with the Caribou Trail District. Cascade (5-3 overall, 1-3 CTD) finished fourth in its five-team league, while Deer Park (3-6 overall, 1-5 NEA) finished sixth in its seven-team district.

Hogan, the Stags’ third-year head coach, said fundamentals will be key to coming out on top.

“Our preparation won’t be any different,” he said. “We’ll do all of our homework [on them] this weekend. The biggest difference is one of us has to travel much further.”

From Leavenworth, the Kodiaks will drive over three hours for the matchup.

“We’re home, so it’s not a big change for us,” Hogan said. “Our league’s a pretty physical league compared to theirs. So I think that might be the biggest difference.”