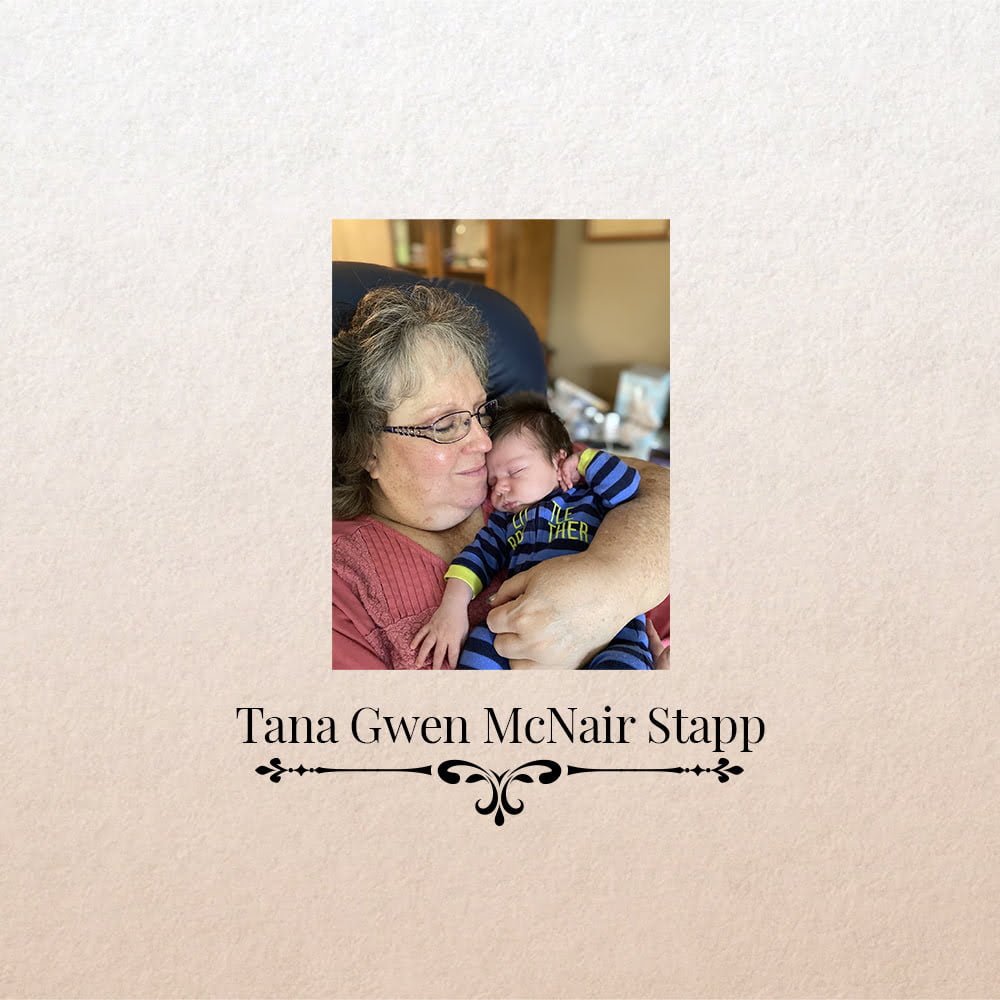 On Wednesday, September 29th, 2021, Tana Gwen McNair Stapp passed away at the age of sixty-three while at a family reunion.

Tana was born on a snowy Valentine day in 1958 to Theron and Annetta McNair of Avoca, Texas.
She is preceded in death by her father Theron, mother Annetta, older brother David, and her first baby.
She is survived by her husband of forty-two years, David Stapp, sister Sabrina, brothers Bruce and Mark,
Sons Drew (and wife Kristen) Caleb (and wife Elisa) Josh (and wife Rebecca)
Daughters Tabitha, Bethany (and husband Joshua) Miriam (and husband Matthew) Selah, Charity, Rebekah, and Elizabeth
And grandchildren Ruth, Peter, Ella, Micah, David, Amelia, Jesse, Joel, Ezra, Anna, Patrick, and baby girl expected by Matthew and Miriam in February 2022.

Tana grew up as an all-star athlete with a love of competition. She earned several awards including
Unanimous choice by all the district coaches to the all-district basketball team her sophomore year
Sportsmanship trophy at a big basketball tournament where her team did not even place, and
Her junior year, she and Patty Prince Snodgrass placed in tennis at district and area, then lost at State to the team that won first place.

After graduating from Leuders-Avoca High School, Tana attended Howard Payne University and Hardin-Simmons University. Her proudest moment in college was during a PE class when she stole the basketball – not once but twice – from a very tall athlete who played for the university team.

Tana’s mother Annetta introduced her to David one Sunday morning in August when a youth ensemble David coached was performing at Avoca Baptist Church.

They were married after a whirlwind relationship and only two-month engagement, because the long distance phone bill was getting out of hand. They married on February 2nd, 1979 and began their life together.
They raised ten children, worked as missionaries in Rapid City SD, served 8 churches, and produced many years of amazing Independence Day celebrations.
Tana served many families with kind hospitality, delicious tortillas, and by beating them roundly in vicious rounds of the card game Nerts.

Tana loved Christmas, reading the book “The Greatest Christmas Pageant Ever” to her kids every year on Christmas Eve, and everyone loading into as many vehicles as it took to go Christmas caroling. The record was 56 homes in one Christmas season!

She loved her kids with her whole heart. Her happiest moments were when she was surrounded by her family. She loved listening to her kids making music together, and sitting around the table telling stories and laughing so hard that the dreaded “Stapp clap” would start.

Tana loved her husband with her whole heart. The two of them had very different personalities, but their commitment never wavered. Even when Tana’s health suffered, David cared for her with faithfulness, kindness, and love.

Tana left this earth the way she would have wanted – surrounded by the people she loved and trusted the most.
And she died as she lived: her last words were “I love you all.”