Pursuit in the Deer Park Area 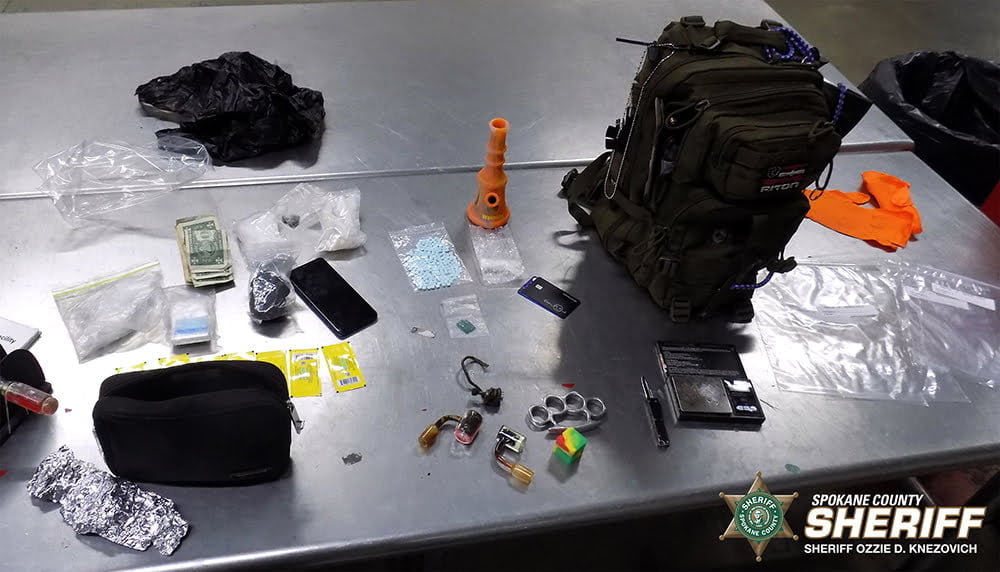 Deputies created a net around the Deer Park area to capture a motorist that was attempting to evade authorities.

Spokane County Sheriff’s Deputies work together to contain a large area in North Spokane County, denying escape routes, forcing the rider to ditch his motorcycle and attempt to hide.  K9 Bo quickly found the rider hiding in tall grass and took him into custody.  A large number of illegal drugs were discovered in the suspect’s backpack, and a switchblade knife and brass knuckles were found and booked into evidence.

On June 18th, 2021 Deputy Matt Ennis noticed a motorcycle traveling in the right lane of Hwy. 395 near Monroe Road.  As Deputy M. Ennis passed by it, he observed the license plate was at an angle and partially blocked, making it unreadable.

After Deputy M. Ennis passed by, the motorcycle slowed down even more. The motorcycle appeared to slow until it caused traffic to back up on 395. Deputy M. Ennis turned onto North Road and turned around to conduct a traffic stop for the license plate violation and check the rider’s welfare.

When the motorcycle passed, Deputy M. Ennis activated his emergency lights and siren, signaling for the driver to pull over.  The rider slowed to approximately 10 mph and moved to the shoulder of the road but suddenly accelerated back onto the highway, traveling at 100 mph or more.  Deputy M. Ennis advised that he was in pursuit of the motorcycle via his radio, and additional patrol units began to respond to assist.

In an effort to evade, the rider drove into oncoming lanes to pass a vehicle traveling north. With the safety of other motorists, the rider trying to evade, and the Deputies involved, Sergeant Rogers terminated the pursuit a short time later.

With additional Deputies in the area searching, glimpses of the motorcycle were seen at Hwy. 395 and Main Street, going south on Short Road, east on Burroughs, west on Antler, south on Dahl Road, and was last seen southbound on Hattery Owens Road, where the suspect turned off the lights.

Deputies believed the rider was hiding reasonably close with the dirt roads and no dust in the air.  Deputy M. Ennis pulled over, turned his vehicle and lights off, and exited his patrol car to listen for the motorcycle.  A few minutes later, he heard it start and observed a headlight near the 5900 block of Hattery Owens Road.  Deputies converged on the area but still could not locate the bike.

A neighbor in the area said he noticed the motorcycle on a private drive between his residence and a neighbor’s.  Believing the rider was still in the area, Deputies checked the neighboring homes while Deputy Christina Ennis watched the roadway in case the suspect attempted to flee.

Soon after, the neighbor notified Deputies C. Ennis that he just heard a motorcycle start in an area between the Deputies searching.  She drove north and located the motorcycle in a ditch, west of a driveway in the 5900 block of Hattery Owens Road.

Deputies set up a perimeter and began giving K9 announcements.  Deputy Overbay and his K9 partner Bo started a track from the motorcycle in 2’-3’ tall grass.  Approximately 30’ from the start of the track, K9 Bo located the suspect, later identified as 35-year-old Baron I. Lohne, hiding in the tall grass.  After a short struggle, Deputies removed Lohne’s backpack and placed him in handcuffs.

Lohne had multiple edged weapons strapped to the side of his backpack.  Lohne was advised of his rights and searched for weapons.  Deputy M. Ennis pulled a pair of brass knuckles from Lohne’s back pants pocket and a switchblade knife from the right front pocket of his jacket.  Lohne stated he tried to run because he did not have a valid driver’s license.  When asked if he had anything illegal in his backpack, Lohne denied wearing or having a backpack.  However, when confronted with the fact he was still wearing the backpack when he was located, Lohne said, “I think I need a lawyer.”

Lohne’s backpack was searched, and several drugs and paraphernalia were discovered.  Deputy M. Ennis later booked the drug as evidence noting the following:

The substance will be sent to the lab for testing and confirmation.

After being provided medical attention and cleared, Lohne was transported and booked into the Spokane County Jail for charges of:

After appearing for first appearance in court, his bond was set at $5,000.  Later that evening, Lohne was released from jail after posting bond.