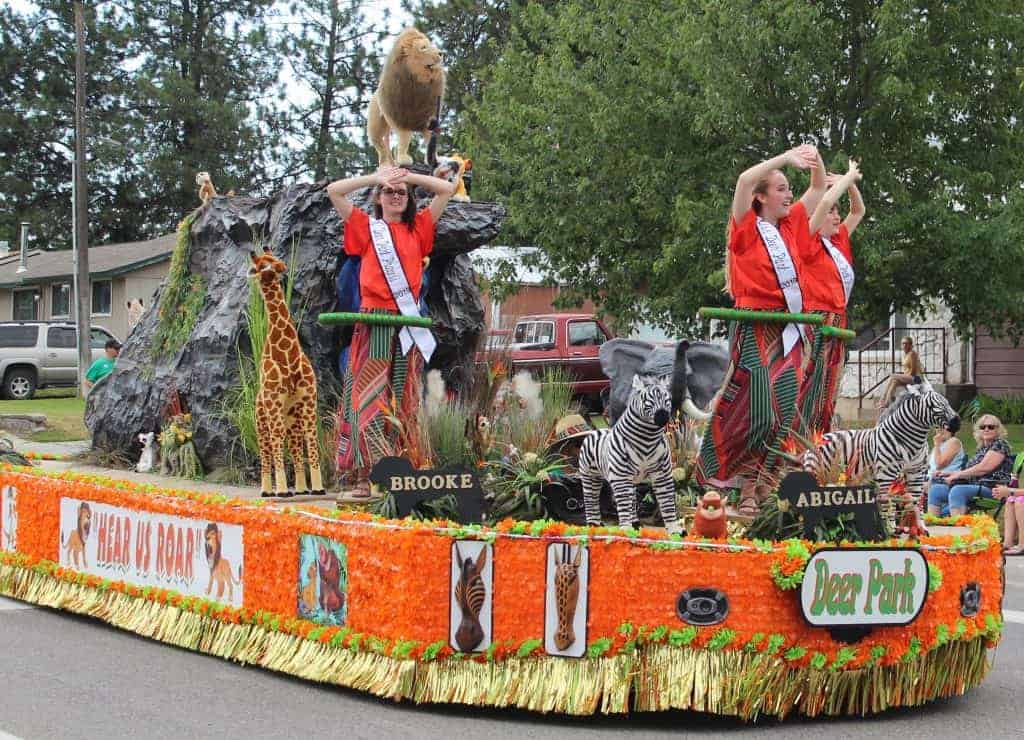 The Deer Park Float travels to over a dozen parades each year and has earned many trophies and awards, but bringing home a first place status is extra special.

On July 13th, the float association and Miss Deer Park Representatives headed up Highway 395 to Chewelah for the Saturday morning parade during the Chataqua weekend. And at the end of the day, they returned home with that coveted first place honor.

While some locations complete judging prior to the parade, Chewelah does its judging during the parade, and the awards are announced after the parade in the park. This process ensures that the representatives on each float give the entire parade their best performance. Deer Park certainly performed well, representing our community in the best light. Smiling, dancing ladies combined with great music and an eye-catching design for the win.

On July 20th, the float made its appearance in the Springdale parade, earning the 2nd place honor along with the Judges’ Choice Award. What an honor to earn a prize in two categories! Springdale is always a fun parade – short and sweet with gracious applause and smiles from those in attendance each year.

Settlers Day and Beyond

The representatives performed yet again, but this time on familiar turf for the Setters Day Parade.  With many parades yet to go, it was good to see the ladies grooving for their hometown crowd.

Next they were off to Clayton for the Clayton Brickyard Day parade on Saturday, August 3rd. In past years, the Clayton parade has been an unjudged event; however, this year there was judging.  Unfortunately, Deer Park’s float did not make it into the competition.

Then, after a few weeks of local parades, the association and representatives, along with family and many alumni of the program ventured up to Penticton, BC for the Penticton Peach Festival and the Peachfest Grand Parade on August 10th — the largest parade in the BC interior with entries rolling through the community for about an hour and a half, according to the event site. This is a full weekend of events for the representatives, including many outfit changes, new faces, and great memories to treasure forever. And, as a special honor, the float is currently featured on the event’s homepage.