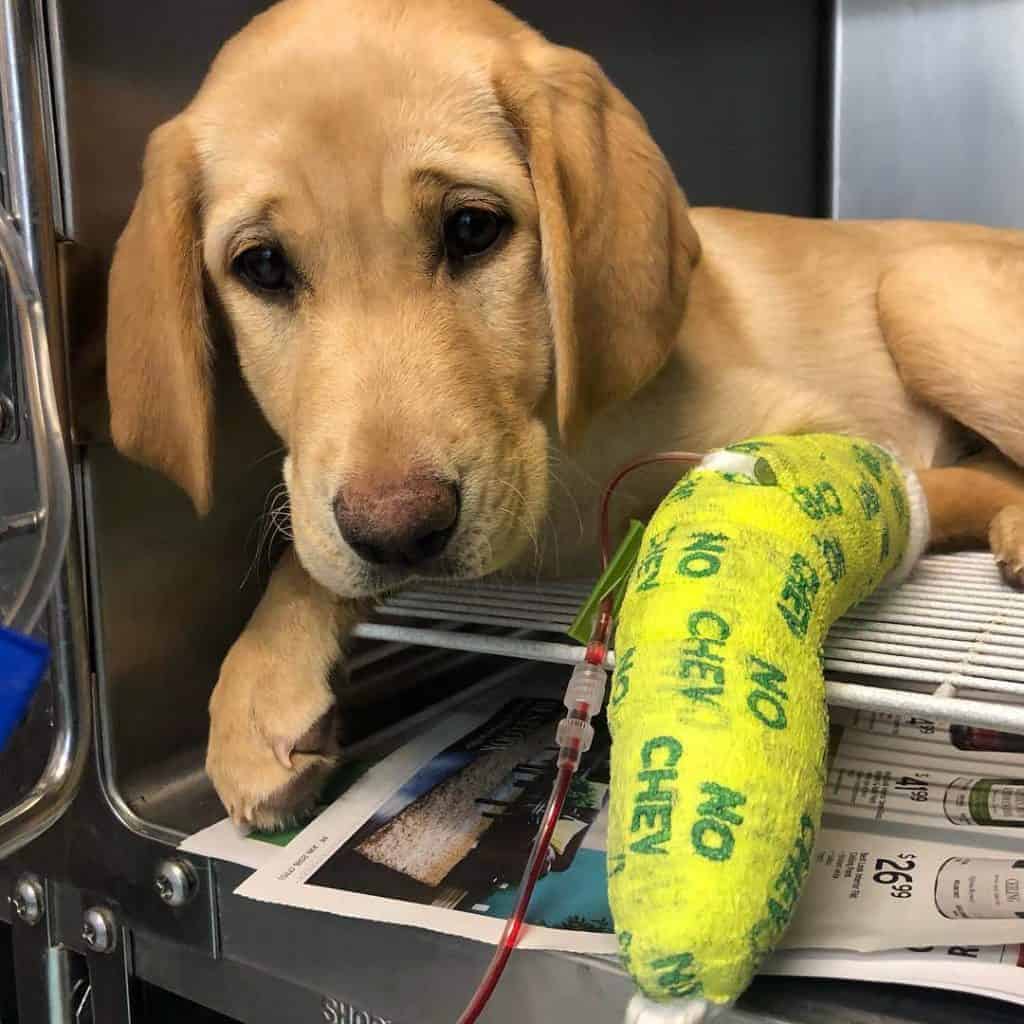 “Canine Parvovirus is a virus that affects many puppies every year. Parvo is a major concern in spring and fall, as the virus survives best in wet environments, and these are also the seasons that we have the most puppies.  Puppies should receive the DHPP vaccine every 3-4 weeks, starting at 8 weeks and continuing through 16 weeks of age. This vaccine includes Distemper, Hepatitis, Parainfluenza and Parvovirus. Even with these vaccines, we recommend that puppies under 16 weeks old avoid public areas, and get carried into Veterinary Clinics.

Parvovirus can survive in the environment for 10-14 months. Bleach at a strength of 1:30 is a way to kill parvovirus on surfaces, but nothing will kill it once it is in the soil. Parvo is transmitted by route of fecal to oral. So if a puppy eats a carrier dog’s feces or steps in it and licks its paws, it can become afflicted by the disease.

The main symptoms of parvo are:

Left untreated, about 85% of puppies with parvo die. Any puppy under 2 years old that has any vomiting or diarrhea is considered to have parvo until proven otherwise. Parvo is tested by a fecal swab sample test.”

Four yellow labrador retriever puppies, Clay, Teagan, Carley and Rainey, were brought in together from a local breeder.  The fifth puppy, a husky mix named Cruz, was adopted through Craigslist. It is not clear where or how these puppies were exposed to parvovirus, but all of them became sick around the beginning of March.  All five dogs that were in treatment at Chewelah Veterinary Clinic were surrendered over to Rescue4All as their owners were unable to continue with their care due to financial concerns. Treatment for parvovirus can cost between $600-$1,000 per puppy, depending on how sick the animal is and how long they need to be hospitalized.  Upon taking ownership of these 5 puppies, the rescue organization also took on any and all financial responsibility for their care. Rescue4All is a volunteer, non-profit organization that “takes in dogs who are out of options.” They provide foster care and medical treatment while preparing the dogs for adoption. Treating parvovirus is a long and expensive process and they are in need of help.

On March 21st, Rescue4All posted an update on the four labrador retriever puppies: “After 5 days, a $2,428.10 veterinary bill, being in separate kennels during parvo treatment in intensive care, being monitored 24/7, hooked up to IV’s to get medications, changing treatment plans, and going through so much with these strong 12 week old babies fighting for their lives! I was so overjoyed when Dr. Levy told me they were well enough to come home.”  Rescue4All also noted on their Facebook page that Cruz, the husky mix, had come through treatment well and was doing great.

All five puppies have been placed with a foster home while they continue to heal and prepare for adoption. These treatments are expensive and can place a strain on the rescue organization. Assistance for dogs in need are made possible through community support. There are several ways that anyone interested can help provide support for these puppies, and other dogs currently in the care of Rescue4All. On their Facebook page, facebook.com/rescue4all they have several donation sites listed and active.

The Chewelah Veterinary Clinic stresses that if parvovirus is caught early, the survival rate will be greatly increased and the cost of treatment is greatly reduced.  So seek veterinary care as soon as puppies under 2 years begin to exhibit symptoms. Parvovirus can be very hard to treat, but with a little extra caution and early prevention steps, we can help keep the number of cases in our area down to a minimum this season.