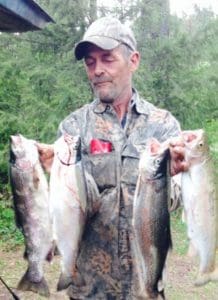 Kenneth “Kenny” Arlie Mittlestedter was taken from us suddenly on Thursday, March 1, 2018 in Springdale, WA at 57 years old.

Kenny was born on February 15, 1961, in Spokane, WA,  to his parents James and Ursula (Francis) Mittlestedter. He attended Deer Park High School from 1977-1980. He served in the military for 6 years in the Army Reserves. Kenny married Patti Watkins (Johnson), the mother of three of his children in April 1984. He worked for Diversified Wood Recycling for many years in Spokane, WA.

Kenny cherished spending the majority of his time outdoors camping, fishing, and hunting with his children and grandchildren. He had many stories to share about the time he spent with his family and those with his childhood best friend, Jimmy Wright. He loved living with his daughter Mandy and her family in Springdale, WA. Kenny was a supportive grandfather and tried to attend and support his grandchildren in all of their sporting events.

He is preceded in death by his father and mother James and Ursula Mittlestedter, and his brother Kurt Mittlestedter.