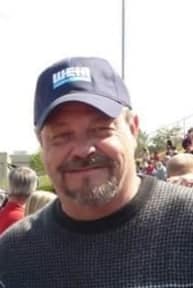 Doug Moss was born in Clarkston, Washington to Rodger and Sheila Moss, who divorced while Doug was young.  Later Sheila married Lewis Gravelle, and they raised Doug and his brother Gary in Lewiston, Idaho, where Doug graduated from high school in 1976.  After graduation, Doug went to work for Potlatch Corporation, and it was there that he met the summer temporary worker who would become his life partner, Martha Jo Scheibe.  They were married March 27th, 1982 and remained committed to one another until his death.  They had two sons, Shane and Luke, and his family was a focal point of his life. All of his grandkids loved to tease Papa Doug, learning early that however tough he might look or sound, he was really a big teddy bear.  Shane and Jennifer of Deer Park have four children: Zoey, Xandria, Zane and Xaiden.  Luke and Bethany of Clarkston have four, also:  Shawn, Eryka, Jocelyn and Kerri.

Doug worked in car sales until he joined the Air Force in 1985 and trained as a machinist.  After serving six and ½ years in the Air Force in California and Washington,  he worked as a machinist in the Spokane area for the rest of his life, most recently with Wagstaff.  He was involved in the Walk to Emmaus community, working hard behind the scenes on Walk and Chrysalis weekends to help create significant experiences for others.  It was normal at family and community events to find him in the kitchen doing dishes or some other part of the unsung labor that needed doing.

Doug was a talented artist who also had a flair for cooking, and loved history, being out in nature, and working with his hands.  Papa Doug could always be counted on to make cooking pancakes a group project as part of a hearty breakfast when the grandkids spent the night, and frequently facilitated building projects, camping adventures, and bargain shopping excursions with family.  He rarely called attention to himself, and liked to put on a gruff appearance to hide the generous, caring man he was.  In addition to his generosity with his family, he would gather broken bikes and toys to restore for children who had none, quietly offering help where he could.

Doug is survived by his wife, sons, and grandchildren, as well as his brother, Gary Gravelle of Lewiston and sister Staci Moss Cogar of Monroe, Washington. His parents preceded him in death. A celebration of Doug’s life will be held Saturday, March 16th at 2pm at the United Methodist Church, 13th Street and Highland Avenue, Clarkston.  In lieu of flowers, donations can be made to Toys for Tots in Doug’s name.